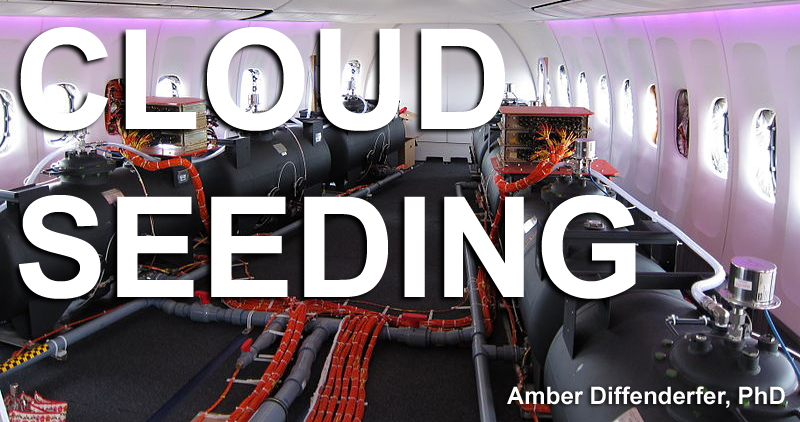 Cloud seeding is happening everywhere, and it could be causing serious health problems in ways you aren’t aware of.

Cloud seeding is a process where chemicals are dispersed into the air to change how clouds produce moisture. The cloud seeding process is conducted by the government to modify the weather in any given area. The chemicals alter the microphysical processes that occur naturally in the atmosphere, thereby creating false weather events. While many different chemicals can be used for cloud seeding, such as solid carbon dioxide (dry ice), silver iodide is the most commonly used.

Silver iodide is a compound of silver, a metal. Silver in its purest form is extremely soft, and is obtainable only by the most elite. When this silver is mixed with other compounds, silver can become a bleach or even an explosive. It can also be made into silver iodide, the chemical that the government is infecting our atmosphere with.

A formerly classified operation, cloud seeding is now a well-known tactic. The majority of commercial airlines have cloud seeding contracts with the government. Cloud seeding has been blamed for natural disasters like floods, tsunamis, droughts, earthquakes, tornadoes, plagues, famines, and may even be responsible for the changes in the atmosphere that are causing the sunsets to appear differently.

The process of cloud seeding is a fringe science. There is no evidence that helps control the weather whatsoever. However, there may be another reason for this chemical disruption of our atmosphere, and it has nothing to do with the weather.

“Silver iodide is basically a dangerous drug. In addition to being a bleach and an explosive, it is extremely addictive,” chemical biologist Sam Reeves with the University of Bolivia said. “In concentrated doses, silver iodide offers a short, but very intense high. When dispersed into the air, however, the effects are minimal and gradual. By drug seeding the atmosphere, the government is effectively building up the tolerance of every United States citizen to silver iodide.”

Reeves fears that there may be a nefarious reason for the government to be drug seeding. However, he stresses that while silver iodide is addictive and toxic and explosive and dangerous, there are many good reasons why the government could be drug seeding. “Silver iodide increases dopamine production, which is a good thing. Feelings of euphoria and confidence are something everyone can use. The alertness and increased energy are the icing on the cake.” These are just a few of the positive side effects of silver iodide.

While the positive effects of silver iodide may sound appealing, the downsides don’t. “The come down is pretty bad,” Reeves warned. “There are also some potential psychological effects, including sadness, delusion and paranoia. That’s why they have to do it so often. 319 million paranoid, depressed, angry people would be a big problem!”

There are other adverse health effects as well. “Exposure to silver can lead to argyrosis, methemoglobinemia, anxiety, seizures, and cardiac arrest.” Scientists also say people who inhale a lot of silver iodide risk permanent lung damage, aka Silver Lung. Because it’s delivered in such small doses right now, the negative effects of silver iodide are minimal. According to Reeves, however, spraying is on the rise. The government has increased the amount of silver iodide it is releasing into the atmosphere by nearly 800% over the last decade.

Reeves warns that while silver can be expensive, the government is not trying to give you a gift. They are exposing you to a toxin, building up your tolerance, and feeding your addiction against your will and maybe your knowledge. “Once everyone is addicted, they’ll stop spraying it, and up the price of silver so it becomes more costly to the consumer. They are literally creating a dependency on silver, and when they take it away, there will be an epidemic of mass proportions,” Reeves claimed.

“I wouldn’t be surprised if we saw silver prices rise to over $1,000 per ounce. It sounds insane, but it’s possible. And at the rate they are spraying, I’m not sure if an ounce of silver would last an individual longer than a week or two.”