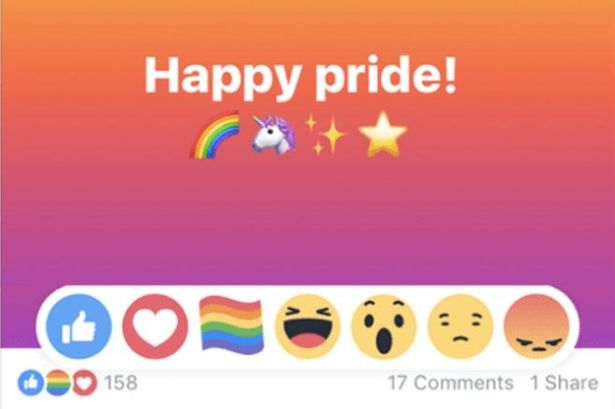 Facebook quietly launched the “pride” react last week, a rainbow flag reaction that can be applied to Facebook posts and comments in place of a Like.

A poll conducted on Sunday revealed a stunning correlation – the pride react on Facebook may be leading to homosexual and pansexual curiosity among straight males.

The survey, conducted by Sharp Research Institute, noticed a spike not only in the homosexual desires of straight males aged 18-40, but also actual physical homosexual activity. It appears that the pride react is influencing men to commit homosexual acts on one another.

A spike in the data of this magnitude has not been seen since around 2016, when transsexuals were given the right to use normal people restrooms.

“The pride react is turning people gay all over the world,” one researcher told us under the condition of anonymity. “We think Obama may have added some kind of MKULTRA technology to the react that is causing people to turn gay.”

The new pride react is available on Facebook through the month of June in an attempt to turn as many straight men gay as possible. Christians are working on a counter assault that will replace the rainbow flags with a pair of praying hands.