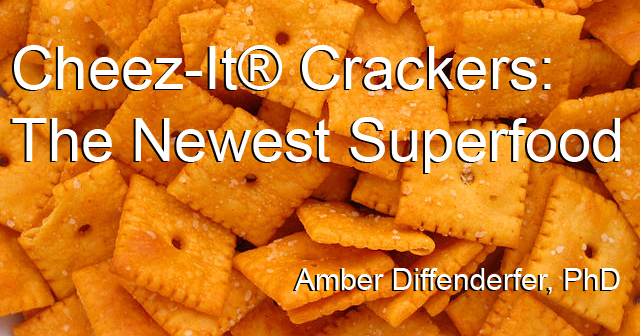 Great news for you snack food junkies: an independent study conducted by the Sharp Research Institute in Texas has new evidence to suggest that Cheez-It® Crackers are beneficial for your health and well-being. The snack, now called a nutrient-dense superfood by science, is packed with B vitamins, folic acid and iron, all of which are essential to survival.

For fans of the crunchy, cheesy, baked cracker, this is excellent news. That good feeling you get after binge eating Cheez-It® Crackers isn’t a placebo effect at all. People all over the United States have long been claiming to feel the health benefits of this new superfood, and according to the study, they really were.

The study, which included women and men between the ages of 18-55, aimed to determine if people who eat Cheez-It® Crackers receive added health benefits like increased energy. To the surprise of virtually no one who has eaten the little squares of heaven, the study found the health claims to be true. This is because Cheez-It® Crackers contain many nutrients that help your body make energy.

A few of the energy-producing nutrients that can be found in Cheez-It® Crackers include:

The study concluded that Cheez-It® Crackers help convert carbohydrates into glucose and metabolize fats and protein because of all of the nutrients inside of them, and are therefore a nutrient-packed superfood that is good for you.

Candy Blunt, an avid marathon runner and Cheez-It® Crackers eater, lives outside of Austin (not actually in Austin, but she runs marathons in Austin sometimes) and likes the extra energy boost she gets from Cheez-It® Crackers. She responded to a request for an interview that I sent out to several of the study participants. “Since I’ve been eating Cheez-Its®, I’ve noticed an increase in my running speed,” Blunt said. “I shaved three minutes off my running time after consuming an entire box in one sitting. I don’t think that’s a coincidence.”

Science doesn’t think so either. The extra boost of energy Blunt receives from the Cheez-It® Crackers is likely due to the cornucopia of vital nutrients pressed into each cheesy, flaky, salty square. Eating more Cheez-It® Crackers is only going to enhance the positive benefits of the convenient and portable snack.

“I should mention since I am being quoted that I prefer the Extra Toasty flavor of Cheez-Its®,” Blunt was sure to point out. “That is important.”

Blunt added, “I sent someone else to the grocery store in my place once, and told her to be sure to get Extra Toasty Cheez-Its and not any other kind of Cheez-Its, and she did.”

The U.S. Food and Drug Administration is still determining the proper daily value of Cheez-It® Crackers based on this new information, but the researchers in the study are recommending at least three servings a day.

“I don’t see any reason why the average healthy adult couldn’t consume one standard 13.7 oz box of Cheez-It® Crackers on a daily basis,” lead researcher Roger Kellogg said. “For a weak or sick person, I would think the recommendation would be higher.”

Writer’s Note: Amber Diffenderfer, PhD fully endorses Cheez-It® Crackers, but has not been paid or remunerated in any way by the Cheez-It® Cracker people for her endorsement of this amazing superfood.