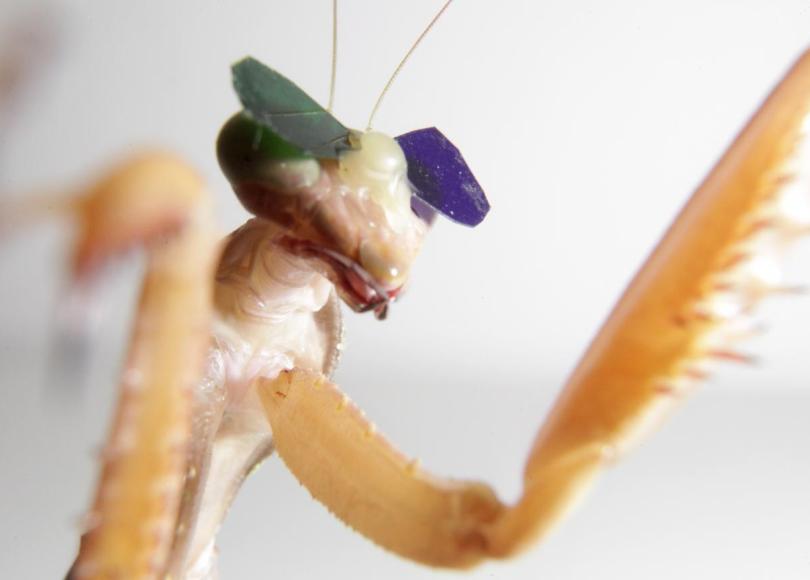 Through a series of new experiments, scientists at Newcastle University have confirmed that mantids can see images in 3D. Mantids were found to be able to see in 3D through a series of experiments in the 1980’s, but the information gained was hardly useful due to the limited technology available at the time.

The Newcastle University team reports that they developed tiny 3D glasses suitable for the insects. The tiny glasses coupled with modern technology means they can show the insects any images they want.

Scientists constructed tiny cinemas for the mantids to view movies on. Using information from the previous experiment and improving upon it, they were able to construct a very realistic miniature movie theatre for the mantids to enjoy. Researchers started the insects off slow with 3D images of simulated bugs moving around on a screen. Once the mantids got comfortable, they were shown a series of more complex images.

IT WAS SO SAD WHEN HAN SOLO DIED IN STAR WARS: THE FORCE AWAKENS

Researchers started with the science fiction 3D film Cat-Women of the Moon, which was released in 1953, but reportedly well-received by the insects. After that, they were shown Jaws 3-D, which was a huge hit. “They really seemed to enjoy this film,” the research notes indicate. “Noticeable flurry of excitement from all mantids, especially #6.”

After catching up on some modern classics, such as The Hobbit: The Battle of the Five Armies and Mad Max: Fury Road, the mantids were able to enjoy the latest in the Star Wars saga, Star Wars: The Force Awakens.

“They were so sad when Han Solo died,” one of the researchers noted. “And when Kylo Ren, the new Darth Vader looking guy who is the son of Han Solo and Princess Leia and who went to the dark side, died? They didn’t take that very well either.”

Scientists also constructed other specialized cinemas for the mantids, including a multiplex and a drive-in. Experiments are scheduled to be conducted later this year, and research on how the mantids like these venues is forthcoming.

A Little Trippy
Researchers decided to take the experiment with the mantids to another level by introducing tiny hits of LSD into their system and making them watch Pink Floyd – The Wall. “The 3D glasses were entirely unnecessary for this portion of the experiment,” one of the researchers told us. “But it was entertaining, so we left them on. The mantids didn’t mind.”

Scientists were able to read the brain waves of the mantids to see how they were reacting to the LSD and the film. “What the fuck is happening to me,” one mantids brain waves were translated to. “This is so cool, I hope it never ends,” another was recorded as thinking.

Just because scientific experiments can get a little trippy doesn’t mean the research isn’t valuable. “It’s important for us to know that mantids see in 3D, what it looks like to them, and how they react to different images. It’s also important to know how they behave when they trip on LSD,” one researcher said. “This is important science.”