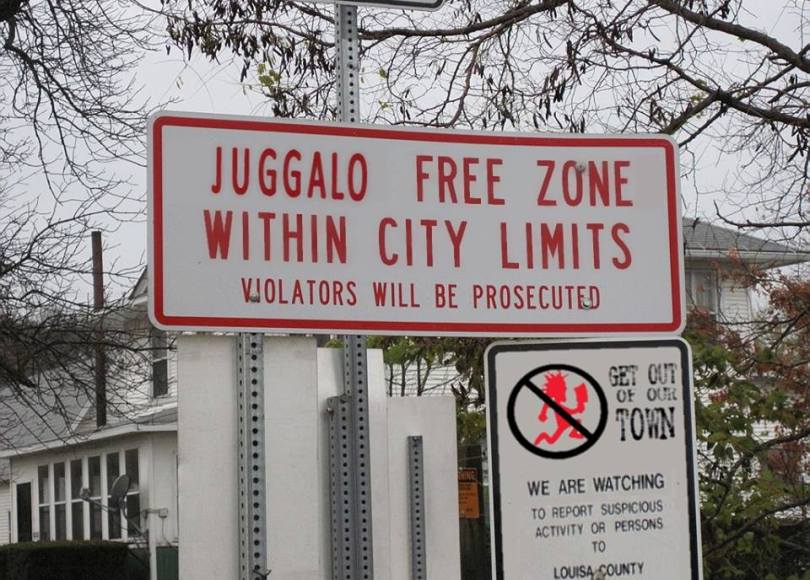 Columbia, South Carolina town councilor Todd Kincannon, aka The Honey Badger of American Politics, recently presented an ordinance to the city council that was overwhelmingly approved. The new law, which went into effect January 10, declares the city of Columbia is now a Juggalo-Free Zone.

Kincannon says he discovered the need to make Columbia a Juggalo-Free Zone back in 2013. Vicious criminal street gangs known as “juggalo gangs” had begun to take over the main streets of this quaint town, giving it a bad name.  The juggalo gangs were threatening to commit crimes and destroy property and even said they may injure someone, though there is no evidence of any juggalo ever causing physical harm to anyone. A lot of people found themselves asking: What is a juggalo?

A juggalo (also known as juggalette or juggala) is loosely defined as a product of the breakdown of the white middle/lower class family structure, but has also been described as an indolent, witless, overly self-glorifying “real bunch of fags” who are a scourge on humanity. Individuals who describe themselves as juggalos often claim to be misunderstood by society, and like to talk about stabbing, beating and killing people while dressed as clowns who drink a lot of pop.

“I politely asked a juggalo to lower the volume of their music on the bus, and instead of being kind and considerate of the other passengers on the ride, the juggalo began swearing up and down,” I was told by someone who encountered a juggalo on a local bus. “He stated that I was hatin’ on ICP, and that I was a fuckin’ whore who needed to keep her goddamn mouth shut. That was the first day I punched another person.” The juggalo did not fight back.

You are most likely to encounter a juggalo in a mobile home park, but recently many of them have either somehow acquired transportation or begged for enough money to ride the bus into town, which created quite a problem for residents of Columbia. These complete and total failures at life would spend their days wandering around town in packs in a state of social confusion, often scaring and threatening the law-abiding citizens who live and work here.

“Juggalos in general don’t seem to have the reasoning skills needed to comprehend the fact that when they dress up like clowns and threaten to chop everyone up with a meat cleaver it makes them look utterly ridiculous in the face of those members of society that process rational thought,” one Columbia resident told me. “These people live in a gray area between homeless cult member and mentally deficient juvenile delinquent.”

Todd Kincannon began writing the life-changing ordinance after an encounter with a juggalo on the street who cat-called his wife. “You can’t just do that,” Kincannon shouted during the interview, his face turning red, pounding his fists into the table. “You can’t mess with other people’s property like that!”

It took a couple of years for Kincannon to finish writing the ordinance, and even longer to generate support for his idea. “A lot of people around here don’t really understand the threat we face by allowing Juggalo gangs to have free reign here, they think it’s just a joke or a nuisance they just have to deal with,” Kincannon told me when questioned about why it took him so long to get the ordinance passed. “Plus, I’ve been kind of busy with other stuff.”

The residents of Columbia seem excited to see the new ordinance implemented. “I personally have been threatened with murder and rape by juggalos before, all because I wandered into the wrong park to be with my girl,” someone on the internet said. “I laughed at them because they were like 12 and maybe a quarter of my size, but still. That ain’t right.” Since the signs went up a few hours ago, Columbia has already seen a significant decrease in criminal activity threats by juggalos.

“I love what Todd Kincannon has done for the city of Columbia, and I hope we can get someone cool like that here in Augusta,” someone who sounded kind of like Todd but claimed not to be Todd but wanted to remain anonymous told me over the phone. “The protocol for juggalos should be immediate humane extinction and sanitization of the whole area,” the caller said.